The Architectural, Cultural, and Religious Significance of Minarets

Islamic architecture has long been acknowledged as one of the most significant and influential typologies that translates the religion’s core teachings and beliefs into structures. One of the most striking characteristics of architecture in the Islamic world is the focus on interior spaces. Whether it is a methodical organization of interior layouts to make use of natural light and ventilation, or the intricate detailing of ornamentation through carvings and paintings, the contrast between exterior and interior is palpable. However, one particular architectural feature defies the norms of modest facades, and stands as a strong visual statement of the presence of Islam. The minaret’s distinctive structure strengthened its presence as a focal point, guiding people towards the religion’s holiest space. In this article we will explore the reason behind the use of minarets and how its function has evolved culturally and architecturally. 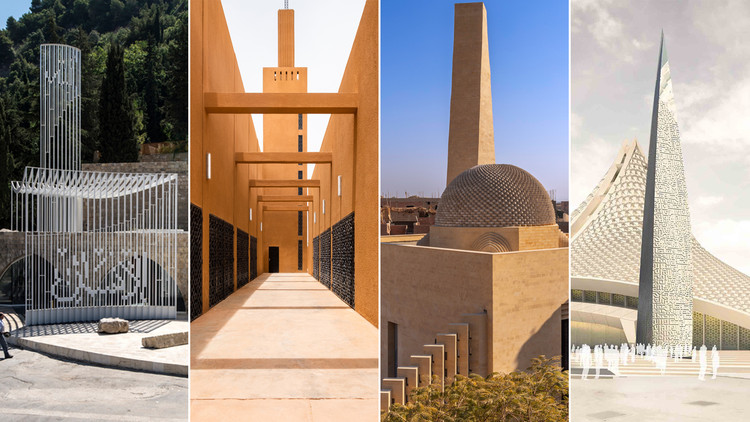 A typical mosque’s architecture consists of an open courtyard, an arcade, a prayer hall, and a minaret. The domed structure includes a Qibla wall (facing Mecca), a mehrab, a semicircular niche placed for the mosque’s Imam to lead the prayer and the minbar, an elevated seat for the Imam. Beyond its religious function as a place of worship, the mosque holds cultural and social value, as it provides a place for social gatherings, education, philanthropy,

During Islam’s earliest times, the call for prayer, or Athan, was performed on the mosque’s highest point, and since people did not have the technological means to amplify the Athan’s reach, the architecture of the mosque and its location was highly influential on how the sound was being transmitted across the land. Inspired by Greek watchtowers, which is believed to be one of the first minaret-like structure to be built, builders began erecting similar structures adjacent to the mosques, giving the muezzin a higher platform. Some scholars believe the inspiration behind building tower-like structures came from ancient church steeples in Syria.

Throughout history, minarets have been constructed in a variety of forms and heights, ranging from thick, squared structures to thin, spiraled ramps. At the base, the minaret has a square-shaped foundation attached to the corner of the mosque, and as the structure rises, it changes into a series of squared, hexagonal, octagonal, or circular stacks with balconies and niches. Towards the top, the minaret is either left as an open platform, or sealed with a dome or cone-like element. To further highlight their structural and visual presence, the highest part of the tower, whether its the structure itself or what it’s topped with, is heavily ornamented with carvings, paint, or reflective material.

Mosques can have up to 6 minarets, depending on the size of the mosque and its visual prominence with respect to its surroundings. In terms of access, the muezzin can either reach the highest level through an external or internal staircase. In particular cases, such as the Great Mosque of Samarra in Iraq, also known as the Malwiya, the structure itself is a grand minaret enclosed by a spiral ramp that can be accessed by the pubic.

The world’s oldest serving minaret dates back to 727 AD, a monolithic square-formed tower in Tunisia’s Kairouan Mosque. Situated in the UNESCO World Heritage town of Kairouan, Tunisia, the mosque, which is also known as the Mosque of Uqba, is considered as one of the largest Islamic monuments in North Africa. Its square-based minaret was built at the center of the northern façade, unlike its usual placement at the corner of the mosque. The structure rises 31.5 meters, with base of 10.7 meters on each side. It consists of three levels, topped with a small ribbed dome. Built with rubble stone, the tower includes a staircase of 129 steps which can only be accessed from the interior. The courtyard-facing side of the tower is punctured with windows that provide light and ventilation into the space.

Nowadays, architects have looked beyond the functional need of the minaret to call for prayer, and saw it as an architectural stamp of the Islamic religion, without pushing the limits of its already-established principles. Several environmental, structural, and governmental constraints led to alterations in the architectural typology of the “typical mosque”, removing some of its traditional features, such as domes, arcades, courtyards, and minarets. Contrarily, cases without any external limitations allowed architects to take advantage of the minaret’s symbolic presence and use it as their creative canvas to highlight the building’s function in a contemporary context. With dimensions similar to those of skyscrapers, minarets have been reimagined as cultural landmarks with panoramic viewing platforms and visual references to the religion of Islam.